How can we make the most of an incomplete banking union? – Andrea Enria, ECB Supervisory Board Chair

Speech by Andrea Enria, ECB Supervisory Board Chair at the Eurofi Financial Forum

The urgent need for progress in banking integration

I am grateful for the opportunity to deliver this address at the biannual Eurofi Forum. We have finally been able to gather in person and, after such a challenging time, it is a relief and a pleasure to see friends and colleagues once again.

This forum has often played host to discussions on the integration of the European banking sector. Industry representatives have frequently complained about the lack of progress towards a European internal market for banking services that is truly borderless. The debate has traditionally focused on issues related to the euro area institutional framework and legislative reforms. But despite the advances towards a more integrated European institutional and regulatory framework, progress has been underwhelming. For many banking products and services, our market remains deeply segmented along national lines.

Today I will focus on the concrete actions we can take to achieve real progress towards a truly integrated prudential jurisdiction within the Single Supervisory Mechanism (SSM) and within the current institutional and regulatory environment. And by “we” I mean all of us, supervisory authorities and market participants alike. At the ECB we are fully prepared to play our part, but such progress must also be shaped by sound projects and initiatives by banks.

Some argue that, until a fully fledged banking union with all its three pillars is in place, there is very little chance of integrating the European banking sector and we are condemned to a collection of national banking sectors, even within the single prudential jurisdiction.

But just before the summer break we had a timely reminder of the difficulties in achieving immediate political breakthroughs. After years of protracted negotiations, the Eurogroup failed to reach an agreement on the roadmap to complete the banking union.[1] While I am confident that agreement will eventually be found, we cannot simply stand still while complex political negotiations play out.[2]

Moreover, as already mentioned, the political agreement will take the form of a roadmap, with a number of intermediate targets. Completing the banking union, including a fully mutualised European deposit insurance scheme (EDIS), will take some time.

But, in the meantime, we cannot wait. There is an urgent need for material progress towards an integrated banking sector in the euro area. And considering the delicate role the banking sector has to play in supporting a robust recovery from the pandemic crisis, this is a matter of even greater urgency than in the past.

These last 18 months have been extraordinary for a number of reasons. First and foremost, we faced a severe public health crisis which created extreme uncertainty for the trajectory of our economies and the risks facing our banks. But we also had to deal with a whole host of issues in a very compressed time frame. This could have potentially sown the seeds of further fragmentation in the banking union, with uneven national responses. However, I am very pleased that – for the first time – there has been a completely unified European supervisory response to the challenges that the pandemic crisis has posed for euro area banks. We have taken unprecedented supervisory decisions quickly, in close coordination with monetary policy measures.

We have also seen the banking sector successfully adapt its operations to the unprecedented constraints imposed by the measures taken to fight the pandemic. Banks adjusted to a dramatic increase in the use of technology, in terms of both how they work and how they interact with their customers. This digitalisation also gave banks an opportunity to make their business models more sustainable, increase their profitability and become more attractive to long-term investors. With this in mind, in January 2021 we published a Guide on the prudential treatment of mergers and acquisitions.[3] We clarified how we assess merger transactions so that banks know what to expect from us, and we think these clarifications have had an impact on consolidation in the euro area banking sector. In the past few months, we have directly applied the supervisory principles set out in the Guide to several transactions.

But most consolidation transactions still take place within Member States. The European banking sector remains segmented along national lines, even within the single prudential jurisdiction of European banking supervision.

Looking back, much of the progress in cross-border integration that we saw following the creation of Economic and Monetary Union was reversed in the aftermath of the great financial crisis. And the cross-border integration of the sector has progressed at snail’s pace in recent years, even after European banking supervision was established in 2014 (see Chart 1). In fact, the measures adopted by national governments in response to the great financial crisis also led to the “repatriation” of many assets that were previously held in local subsidiaries of cross-border groups. The launch of the SSM has not yet reversed this trend. On the whole, subsidiaries currently account for around two-thirds of EU foreign assets in the euro area, while branches make up the remaining third. 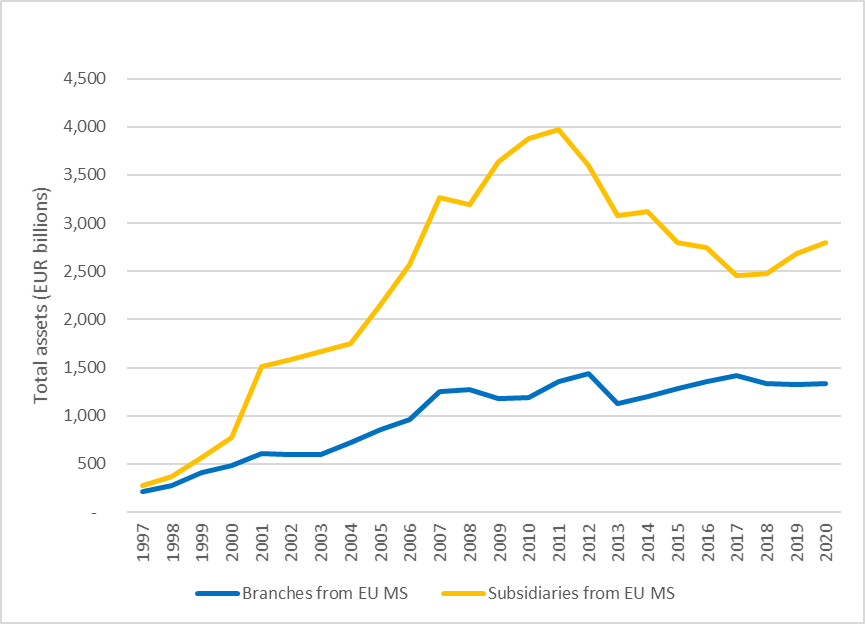 When we look at the split between foreign assets and domestic assets held by euro area banks in the years since European banking supervision was established (see Chart 2), there really does not seem to be any significant change in trend. As we also saw from Chart 1, “foreign” assets[4] in euro area banks have not changed significantly since the creation of the banking union. Banking sector integration in the euro area is still an elusive target.

Chart 2: Domestic and non-domestic claims in the euro area 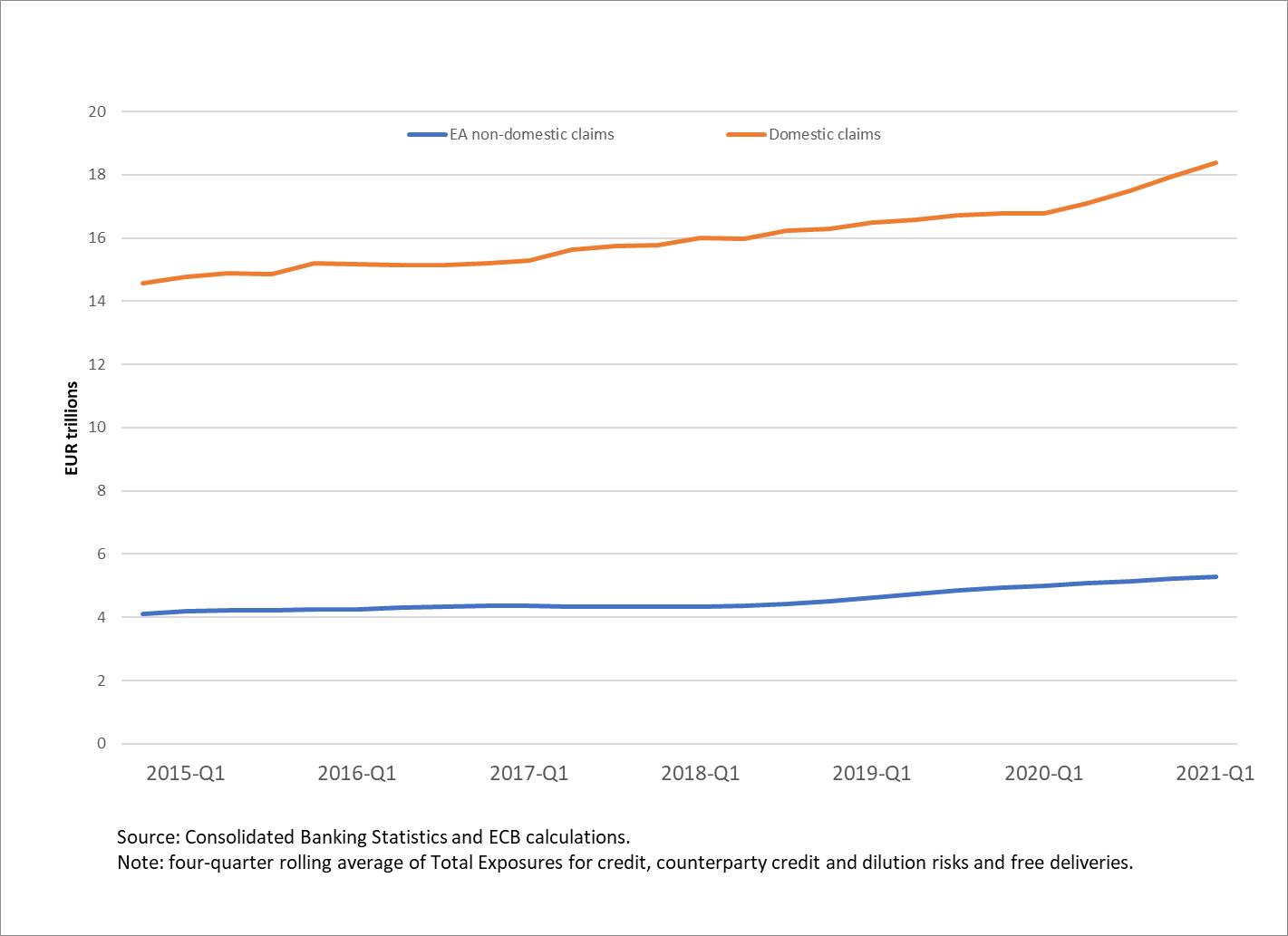 And we all know why this is so detrimental. It is not only the aspect, though absolutely crucial, of denying economies of scope and scale to European banks that need to compete globally with banks that have a much deeper and more efficient domestic market, as, for instance, US banks do.