The European Commission has published today the preliminary report on the initial findings of its ongoing competition sector inquiry into the consumer Internet of Things (IoT) which was launched in July 2020.

1. What kind of information has the Commission gathered for the preliminary report?

The findings in the Preliminary Report summarise the qualitative information obtained by the Commission from the responses to the sector inquiry.

In July 2020, the Commission sent out different questionnaires to companies active in four consumer IoT segments in the EU:

More than 200 companies responded to one or more questionnaires, with a response rate of over 50%. They also shared with the Commission over 1000 agreements in relation to their consumer IoT activities.

Respondents to the Sector Inquiry are for the most part large corporations, both in terms of number of employees and in terms of turnover. However, the sample also includes SMEs, primarily start-ups or specialised service providers. The participants to the sector inquiry are located across Europe, the US and Asia.

2.  What are the main characteristics of the consumer IoT sector?

The use of consumer IoT products is increasingly becoming part of everyday life for EU citizens. In particular, connected audio and video entertainment devices have become relatively widespread: in 2020, for example, 51% of individuals in the EU reported that they used the internet on a smart TV, games console, home audio system, or smart speaker[2].

Voice assistants are becoming key gateways to smart homes, allowing companies to establish interoperability and to build a smart home environment based on products from different manufacturers. They represent the fastest developing interface for users to access the web, to use and control smart devices and to access consumer IoT services. The number of voice assistants in use worldwide is expected to double between 2020 and 2024, from 4.2 billion to 8.4 billion[3]. Moreover, 11% of EU citizens surveyed in 2020 has already used a voice assistant[4].

The leading providers of voice assistants in the EU are Amazon (Alexa), Google (Google Assistant) and Apple (Siri).  Their general-purpose voice assistants enable users to access a broad range of functionalities in response to voice commands, such as playing music, listening to the radio, to news or to podcasts, controlling smart home devices, providing information or helping in planning and executing daily routines.

3. What are the main features of competition in consumer IoT?

Respondents identified quality and brand reputation as the main parameters of competition in the sector. At the same time, when asked about entry or expansion barriers to developing and launching smart home and wearable devices, consumer IoT services and voice assistants, respondents pointed to the cost of the technology investment and the competitive situation in the sector, as shown in (figure 1)[5]. This is especially true for voice assistants: respondents stressed that the cost of developing and operating general-purpose voice assistants is almost prohibitively high and there is a general belief that there will not be new entrants in the short term.

Figure 1: Barriers to entry or expansion 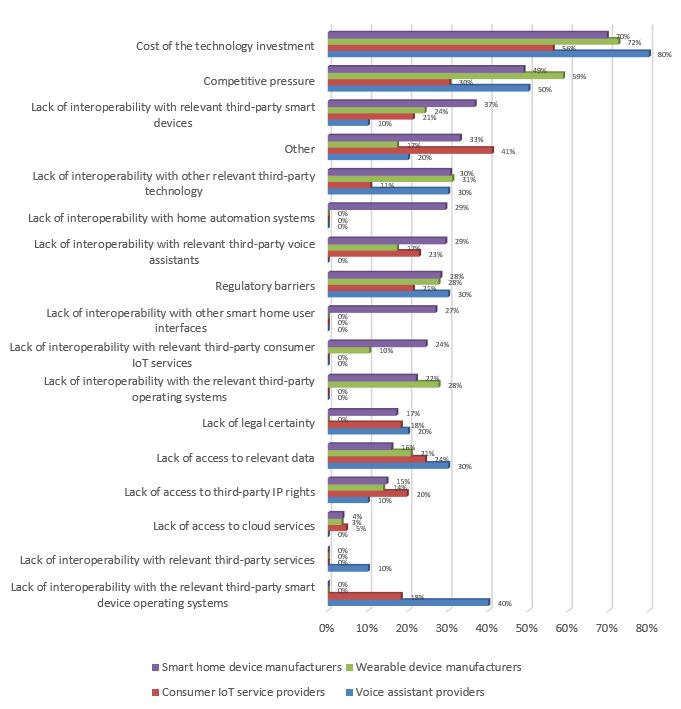 Nevertheless, the features of competition vary depending on the product or service concerned. For example, there are only a few alternative voice assistant providers, whereas quite a large number of companies are active in the manufacture of smart devices and the provision of consumer IoT services.

In terms of future expansion within the consumer IoT sector, most respondents indicated that they plan to develop and launch other smart devices and/or to expand their business to other consumer IoT segments in the next three years (figure 2).

Figure 2: Plans to launch new consumer IoT products or services in the following three years (% of total respondents per questionnaire)

4. Which concerns were raised during the sector inquiry?

The Preliminary Report sets out the main potential concerns raised by respondents in relation to the following areas, including:

5. What are the next steps?

The final report on the sector Inquiry is expected in the first half of 2022.

The information collected in the context of the sector inquiry on the consumer IoT will eventually provide guidance to the Commission’s future enforcement activity, to ensure respect of EU competition law.

Furthermore, the findings of the sector inquiry may also feed into the regulatory work of the Commission.

[5] The figures represent, per consumer IoT segment, the percentage of the respondents to the question that mark a given factor as an existing barrier to entry or expansion.

Main results of the video conference of EU economy and finance ministers, 26 July 2021